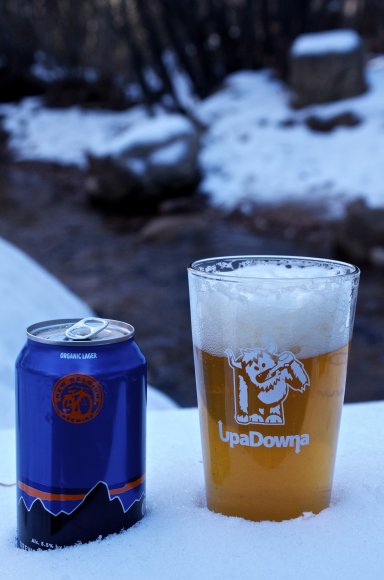 "In celebration of Patagonia's 40th anniversary, New Belgium brewed an organic California Common Lager with Patagonia. Boasting a California lager yeast with subtle fruity esters and a refreshing and light lager finish, California Route is canned for adventure. Crack one and inhale an aromatic blast of citrusy Cascade hops and heavy dose of Nobel Hallertau. The addition of organic Munich specialty malt will build complexity with hints of freshly baked bread." -N.B.

After a local buddy hyped this beer up and informed me that it's a limited run and once they're gone, they're really gone I raced to the local shop to pick some up. When it comes to organic brews, I don't get too excited. I've had a few in the past that were more of a bust in my opinion than anything else. But I'm pleased to say that the California Route did not disappoint. I'll go as far as to say this might have been my favorite lager of all time… might.

The California Route pours to a translucent golden body with a nice white head. If you are sitting in a foot of snow while pouring the lager fast you'll get an overly large fluffy head. This was a really clean tasting, crisp lager that can be easily sessioned with a mild ABV of 5.5%.

The California Route is an all around great tasting lager with a good feel from the front to the finish. The hardest part to swallow on this beer is the $9 plus cost per 6 pack. But after reading further into it, and learning that all profits garnered from the selling of California Route will be donated to those impacted by the recent floods in Colorado, it made that price tag much easier to swallow. So easy in fact that I bought 4 of them (6 packs).

As mentioned California Route was a limited release and they are going fast. Adding to the short run of this beer and making it even more rare, the California Route will only be available in the following states: Alaska, Arizona, California, Colorado, Washington, D.C., Georgia, Idaho, Illinois, Indiana, Michigan, Minnesota, Missouri, Montana, Nevada, North Carolina, Oregon, South Carolina, Texas, Washington, Wisconsin.

If you see the California Route out there grab it while you can. It is a great tasting lager that won't be around long at all. I'd say in honor of Patagonia and the recent flood victims, New Belgium hit the nail on the head with this one.